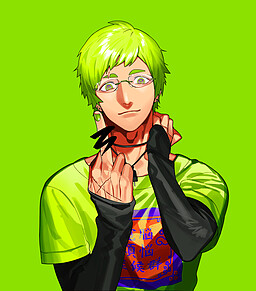 The "cordial" serial killer.Gender identity: QueerSexual orientation: BisexualNumber of victims: Around 40Killing motive: Transform the negative into 0+ - Rehabilitate the defective, gain perfect resultsThe critic. Those who wear their individuality wrong are polluters. Polluters who can’t take responsibility for their misbehaviour should be re-educated. Until perfection is achieved, I will be "cordial", and attend to them in a way that is not too severe or lenient.The young head of staff at a high-end hot spring inn. They are a perfectionist with the gift of the gab. They refuse to allow their work to be anything but perfect and are deeply trusted by all of their colleagues thanks to their gentle but thorough manner and their exceptional social skills. However, whether for better or for worse, their personality varies depending on whether they are on and off duty. As soon as they're off the clock, they transform into what many call a "chatterbox", a "windbag" and a "waste of oxygen". A wisecracking hyena with a sharp tongue unleashing an endless spew of gibberish and depraved insults. They describe themselves as a twisted, cute, but "totally cringe nerd". They have the habit of moaning whenever they get surprised. Their specialty is telling false old stories on the spot as if they had really happened before.Likes: new conversational topics and words, all things natural such as plants, vegetables, and fruits; fancy and cute things (especially Haniwa), any kind of stewDislikes: polluters, jokes that aren't funny or just painfully irritating, arguments 100% based on emotionHobbies: vegetable gardening, online games and mobage, playing an instrument while singing, billiards, working out[Adapted from official twitter and official website]