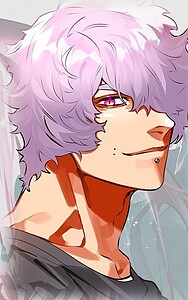 One of the members of the popular male idol group "SunLablooD". He is an old friend of Shishishiki Gira and Kourakuji Sana. Despite his rugged appearance, he is a cheerful, shy person and a VTuber stan. According to the two members, he is "actually the one who cares the most about the group". He was originally not interested in dancing or singing, but Gira appreciated his exceptional athleticism and sense of style, and forced him to join the entertainment industry to perform on stage.[Adapted from official twitter]