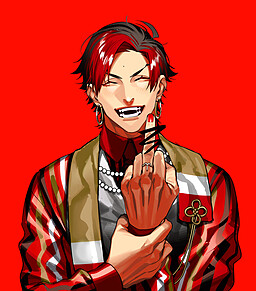 The "passionate" serial killer.Gender identity: MaleSexual orientation: StraightNumber of victims: Can’t remember, but around 30Killing motive: Reward the righteous and punish the wicked - I'll slaughter the evil with my own fists The executioner. A human guillotine who is dazzlingly pure and does not overlook any form of evil. While his unbending "passion" is manifested as the violence used in taking lives, it might sometimes bring about answers and guidance to other people. The administrator of the Red Rum Plaza apartment building and a freelancer who'll do any job needed. He's passionate and lively, with a strong sense of justice but also a childish innocence. He is completely 100% definitely heterosexual (a rarity in the modern age, I know) and absolutely adores women. However, he would never discriminate against those who have a different gender identity or sexuality than him. Despite his good looks & ability to perfectly fill the caring older brother role, his sheer inability to keep secrets and his childishness mean he has just as many enemies as he has allies. As much as he wants to be popular with the ladies, unfortunately for him, he is not. A hopeless romantic. Loves those lewd jokes that circulate among schoolboys and, even if he gets in trouble every day, when push comes to shove​, he can get the job done. Perhaps this is why people call him a "lovable idiot".Likes: anything romantic, B-movies that have nothing going for them but their energy, all that is stylish or cool, boobs and assesDislikes: anything uninteresting, dudes with boring kinks, bad peopleHobbies: capsule-toy vending machines, game arcades, listening to music, all forms of entertainment [Adapted from official twitter and official website]