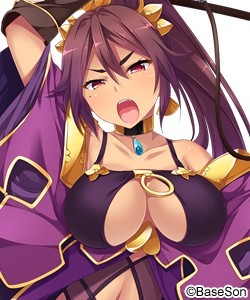 Reichen's older sister. She and her little sister used to run a butchery when the late emperor fell in love at first sight for Reichen. After the marriage Kei got the position of Great General (大将軍) despite not having much talent or training in military or in martial arts. Kei and Reichen are despised inside the castle because everyone knows they have no talent, make terrible military/governmental decisions and only got their positions due to Reichen's marriage.Kei is very loyal to her sister and has said many times that she would do anything Reichen asks. According to Reichen, Kei's personality is "Strong against those weaker than her and very weak to those stronger than her" so Reichen controls her easily. In other words, she acts sadistic or masochistic depending on who she's interacting with. She's very proud of her looks and her position as the Great General and hates when anyone mentions that "she's just a meat seller", reacting aggressively and making even more enemies for her. She also uses her looks to seduce men to do her work similar to Reichen, though she's aware that she's not as good at it as her sister.